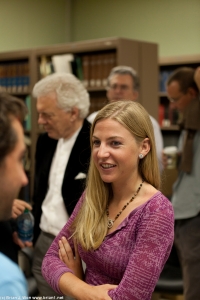 It is with deep sadness that we convey the death on 7 July of Dr. Anna Dvorak (1987-2015), who suffered an accident while climbing in the Idaho Mountains.  Anna was born in Southern California.  Following degrees at the University of California, Berkeley and the California State University, Northridge, she studied for her doctorate in the Department of Geography at UCLA, under the supervision of Prof. Stephen Bell.  Anna’s thesis on the cultural-historical geography of Polish settlement in Brazil was completed in 2013.  At the time of her accident, Anna was still in the early stages of a tenure-stream appointment in the Department of Geography and Anthropology at Eastern Washington University.  A permanent record of her work lives on mainly within articles published in Brazil.  Anna was an avid participant in outdoor pursuits, including mountain biking, hiking and climbing.  She will be sorely missed by her family and many friends, including in the Department of Geography at UCLA.