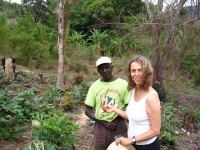 (Ph.D., UC Berkeley, 1986) conducts fieldwork on Africa and the African food legacy in the Americas. She teaches courses on African ecology and development, the African diaspora, Atlantic environmental history, food and the environment.

2018 Elected Fellow of the Association of American Geographers

2017 Elected to the American Academy of Arts and Sciences

2010 Frederick Douglass Book Prize, Gilda Lehrman Center for the Study of Slavery, Resistance, and Abolition, for In the Shadow of Slavery: Africa’s Botanical Legacy in the Atlantic World (University of California Press, 2009).