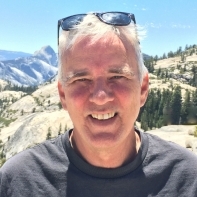 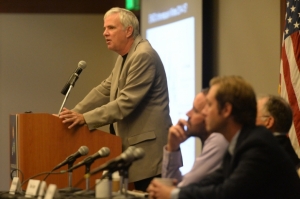 Glen Sproul dit MacDonald is a Distinguished Professor and hold the Endowed Chair in Geography of California and the American West at UCLA.  He holds an AB in Geography from UC Berkeley, M.Sc. in Geography from the University of Calgary and a Ph.D. in Botany with a Geology Minor from the University of Toronto.  He works on issues of long-term climatic and environmental change and the impacts of such changes on ecosystems, fire, natural resources and human societies. Particular interests are water resources and the Perfect Drought concept, and the fate of coastal marshes and wetlands in the face of climate change.  He also writes on John Muir’s legacy and the creation of a New Environmentalism in the 21st Century. He has published over 180 peer-reviewed articles and an award winning book on biogeography. He has published Op/Eds in the Los Angeles Times, San Francisco Chronicle and Sacramento Bee. He is a member of the National Academy of Sciences, a Fellow of the Royal Society of Canada, a Fellow of the American Academy of Arts and Sciences, Fellow of the American Geophysical Union, Fellow of the American Association for the Advancement of Science, Guggenheim Fellow and was a Visiting Global Fellow at the University of St Andrews, a Visiting Fellow at St. Catherine’s College, Oxford and a Visiting Fellow and Life Member of Clare Hall, Cambridge.

I study climate change and its impacts on ecosystems and societies. A particular focus is drought and water resources. In recent years I have been engaged in issues of sustainability and bridging the academic, governmental and business spheres to enhance efforts in sustainability. A specific interest is strategies to sustain Californian and Southwestern agriculture, cities and ecosystems in the face of growing human demands and climate change.I maintain very active field and laboratory research. In our lab we reconstruct past climate change and impacts through the use of fossil pollen, fossil stomates, plant macrofossils, insect remains, tree-rings, geochemistry and historical records. We also do work on issues of current and future environmental change with a focus on water scarcity. My lab facilities are relatively extensive and consist of four rooms with full facilities for pollen and plant macrofossil processing and analysis, tree-ring analysis and elementary sedimentological analysis. Field equipment includes livingstone and hiller sediment corers, tree-ring corers and chainsaws, GPS, radios, and misc. field camp supplies. Areas of active field research have included California, the northern Great Plains and adjacent Rocky Mountains, the North American subarctic, Russia and Siberia, and Egypt.

Fellow of the Royal Society of Canada (2019)

Fellow of the American Academy of Arts and Sciences (2016)

Fellow of the American Geophysical Union (2015)

Fellow of the American Association for the Advancement of Science (2006)

Atlas Award of the UCLA Friends of Geography in recognition of his service to the Department and FOG (Nov. 2006)

Henry C. Cowles Award for Excellence in Publication for the book “Biogeography – Space, Time and Life ” published by John Wiley and Sons (2004)